Finland’s SONATA ARCTICA have named their seventh studio album Stones Grow Her Name. Recorded in several studios all over Finland, mixed at Sonic Pump Studios by Mikko Karmila and mastered at Chartmakers by Svante Forsbäck, the album will be released in Europe on May 18th and in North America on May 22nd.

“Our newest adventure is only a final touch short of being ready. The recordings went extremely well and the mixing is in schedule. Have to say I am enjoying myself greatly. I’ve had a very hard and work- filled two year period writing the songs while touring extensively with our previous album The Days Of Grays, but it has all been worth it! Yet again, we are introducing new things to keep the music alive and interesting. New elements, styles and new moods, talented guest artists and ideas for the enjoyment of the loyal friends of our music. Can’t wait for you to get your hands and ears on Stones Grow Her Name! Hope to see you all again on tour! Be well!“

The track listing for the standard jewel case version will be: 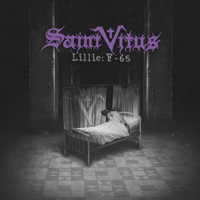 SAINT VITUS’ forthcoming album is entitled “Lillie: F-65” and has been scheduled for an April 27th release (North American date to happen in May). Here are the cover artwork and tracklisting of this highly-anticipated piece of Doom:

“The dark picture of a haunted music”

We are many out there who love Savatage, but unhopefully this band has not gained yet the total respect it deserves. The fact that there are bands which step on the main base of the Americans and create a personal music gives an extra pleasant side in the unfair years. Crimson Cult from Austria is the band that has a big image of Savatage over its head and goes forward with an inspiration that unfortunately not many people will follow.

When you say that you have a band that states in the central Europe, right next to Germany and your style is power metal, many people will think and say a lot, but no one will be right. Crimson Cult do something different, without be the guys of something new, they will not re – reveal the fire, but their bridge uniting the ideas of the American metal way with the fast clues of Europe and yes they carry a of the Savatage spirit. To be honest the material of “Tales Of Doom” needs a lot of listening, so to understand if you with it or not, if you like
it more or less. It has difficulties that those who have learnt to be liked in simple things will turn it down and this goes to the longest song of the album “The Long Way Home”. I believe that this song should be at the end of the album and this because lasts 9 minutes and has some alternations that are not similar to
other songs. Declaring the things all the songs have few common parts and this is the best part.

Without doubt the beginning is the fastest and the toughest part in the album, three songs, “State Of Fear”, “Behind The Curtain” and “Institution Christ” that contain power, speed, hidden melody and a haunted atmosphere. The last clue of the haunted atmosphere I could say that is the basic component of the album and a clue derived from the theatrical period of Savatage. I would really appreciate it if there were more bands doing this. Be careful by this part it does not mean that Crimson Cult are clones or imitators of Savatage, but it seems that they love that band and they just want to share one piece of their spirit, something logical and always understandable.

Another thing that this material reminds me of Savatage is the vocals of Walter Stuefer, somewhere this guy is able to scream so strong that the ruins will be damaged more, but in other moments he seems somehow slow and too gentle for the needs of the songs. I think that he should be stronger and able to keep his voice high, to adopt a wilder and a theatrical character that will give to the music a tone able to shake anyone’s mind. On the other hand the guitar player and main brain of the songs named Schwammerl plays as hard as he can.

When it is time for the solo he is melodic, catastrophic (on a good meaning) and erupted, he reaches the limits and he knows when he has to stop before being exaggerated. The perfect example of all the above are all the songs, but most of all the instrumental one “The Inquisition”. From its beginning till its end the guitar is your temporary company. Enjoy it!

Difficult period for difficult albums. I think that “Tales Of Doom” is the result that the band wanted and this counts more than everything I have written. Sometimes we think we are judges and this is wrong. The only judge is time and time will show how much the people will admire this album and how many of us will follow the band.

The new album of this Horror Metal Legend from Detroit was officially released yesterday worldwide!

Through the last ten years ambassadors, main players, heroes and many others from the kingdom of power metal, on their way to maintain their identity alive, they tried to be out of their field, by trying or incorporating something different in their
music. Some of them failed and yet they keep going on the same way without realizing that that they have nothing to offer. Some others were more brilliant, without pretended themselves to be and they just said “we keep alive the power clue and we add some modern techniques that most of all are metal techniques”. This is
what Rage did in their new album “21”.

Things are getting clear and simple for those Germans; they wanted it, made their sound and songs more metal than they could be heard leaving outside all the orchestrations and the symphonic bridges. On their places they built bridges of solid metal that seem according to the years able to stand there alive. Riffs that make you bang not only your head, but your whole self too and you make it clear to yourself that you want to hear them again and again. The truth is that in the first seconds of “Forever Dead” I felt somehow strange, but when the song was over,
I wanted more, I was defeated by it and think that before that excellent and airy chorus appears a Pantera riff and you say “how this can be true?”. Whatever you are going to think make it sure as exactly as I am writing it, you are going to hear it for several times again whether you want to assure its style or because you like it.

In “Serial Killer” and “Psycho Terror” our friend Peavy presents a wilder character which consorts perfectly with the flawless playing of the other two gentlemen, Smolski and Hilgers and with the melodic parts that bring back the air of the old periods of
the band. Needless to say that Smolski in all the songs shows a recital of high technique by playing whatever modern he can, just like he does in “Destiny” where he runs on high speeds under control.

The truth is that difficulty you will find a song that will not match to the musical size of the album, even “Feel My Pain” which is like a Firewind song, is really great. All the songs are one by one unique and of course there are the best songs in the album like the first mentioned in here and “Death Romantic” and “Black White”. The second one has a bigger value because of its lyrics, as they are referred to the recent situation of the whole world – society and how exactly we, the people face this situation. A painful truth.

In the end the album is really good, but I am not so sure if it will be liked by the fans of the band that prefer the old days with an old sound. On the other hand I am certain that the new listeners will be pleased by the final outcome and may those who
have never before listened to Rage, with this album do the beginning. Above everything the album offers tones of metal. Do not stuck on the fact of the modern sound, because you will lose the main substance and you will be the losers after all, pay attention to everything, to the high speeds, to the melody, to the choruses. Get in the game, play Black Jack and have 21!

People should learn to expect a little awe and mystery. Phenomena take us upon a journey where there is nothing pretty about the protagonists of the story that we shall meet along the way. The subject is good against evil.

The story began in the year 1983, when Tom Galley wrote a couple of short stories with a transcendental background. Backed by record label Bronze, the recordings for the album “Phenomena” started soon which finally hit the stores in 1985. Besides the extra-ordinary concept story both musicianship and the names involved with the project are highlights to mention. Names such as Glenn Hughes (DEEP PURPLE, HTP), drum legend Cozy Powell (RAINBOW, WHITESNAKE a.o.), Don Airey (DEEP PURPLE), Neil Murray (WHITESNAKE) – the elite of the British Hard Rock scene had joined the project. “Phenomena” received high critical acclaim in the press and extremely good sales.

The second PHENOMENA album “Phenomena II – Dream Runner” was released in 1987 and was welcomed with a similarly warm response. The musicians around the Galley brothers had changed slightly, so that this album in the end featured contributions from Ray Gillen (BADLANDS, BLACK SABBATH), John Wetton (ASIA), Scott Gorham (THIN LIZZY) and Max Bacon (GTR), amongst others.

With new label Parachute involved, in 1991 the time was right for “final part” of the conceptional story; Phenomena III – Inner Visions”. Besides Brian May (QUEEN) and Keith Murrell (AIRRACE), you’ll here also find performances by Michael Sturgis (A-HA) and Scott Gorham (THIN LIZZY). The Complete Works were released in a triple fold out Digipack by Escape Music (ESM142).

However, the PHENOMENA concept continued in 2006 under the banner “PsychoFantasy”, (ESM125 ecolbook and 125r regular version) which strictly follows the traditions of its three predecessors. Besides the concept story background, you will once again will find a whole bunch of amazing artists performing on this record: Tony Martin (BLACK SABBATH), Glenn Hughes (DEEP PURPLE), Keith Murrell (MAMA’S BOYS) – and Mel Galley (WHITESNAKE, TRAPEZE).

In September 2010 a new chapter began with a whole host of musicians, and “Blind Faith” (ESM216) was born to explosive effect. With new Vocalists like Robin Beck, Terry Brock (Strangeways) and Rob Moratti (Saga) a whole new world was unveiled and the concept became so fresh again. The rock audience once more were thrilled to hear the latest in this timeless story.

In 2012 we will all hear the new Album “Awakening”, an album chock full of new ideas and featuring James Christian (House of Lords), Lee Small (Shy) and Toby Hitchcock (Pride of Lions) as well as familiar faces like Rob Moratti, Terry Brock and Mike DiMeo. Powerful songs executed by some of the finest rock musicians make this a hugely enjoyable album and it boasts a fine production from Tom Galley and Martin Kronlund. Here you will find straight ahead rockers with powerful melodies along with up-tempo ballads and beautiful choruses.

Awakening is a fantastic way to start 2012, it is another chapter in the engaging story that Tom Galley began in 1983. In Short, a must.