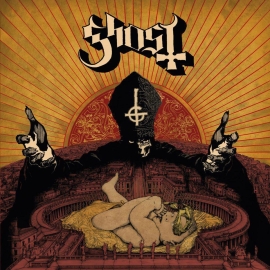 In the old times the biggest enemy of the Orthodox Church was heresis. Heretics used to maintain their theories upon religion and in order to fight Church, they used their spiritual weapons such as hymns. Hearing the music of “Infestissumam” reminded me of that movement from heretics. Ghost custom their music with elements of Catholic Church with the use of an organ and the polyphonic parts.

If you were expecting a surprise album from the Sweden just like their debut “Opus Eponymous”, I guess you got it wrong like me. But this doesn’t mean that we cannot recognize it as a great album. It differs from the debut on the sound. It’s not as heavy as the previous, it’s based more on a light rock/pop sound of the past where we meet the gravity of Beatles with the happiness of ABBA and the rock attitude of BOC. They keep using Latin phrases or names as it is heard in two of the most addictive songs “Per Aspera, Ad Inferi” and “Year Zero”.

It seems that Ghost will grow the art of progressing an idea into a song that varies from parts. Who could expect “Ghuleh/Zombie Queen” whose intro on piano brings in mind both the artistic side of Queen and the peaceful playing of John Lennon. Beautiful melodies that are being followed by eruptions. Of course there are and the heavy songs like “Secular Haze” and “Depth of Satan’s Eyes”, where guitars present their lead role.

The vocals of Papa Emeritus II (as he has renamed himself) sound more snappy and mature. This album is really nice and as a record cannot come out from my mind or yours, I suppose, as we could expect. But the future of Ghost and their ability on preaching Satan’s words will be judged by their next record step. We wait…