CONVENT GUILT announces today the artwork of their much anticipated debut full-length “Guns for Hire” which will be released on LP by Cruz del Sur Music and on CD by Shadow Kingdom Records. As you can see, the painting of these four heavy metal horsemen riding onto a barren horizon hints at the best graphic tradition of classics such as MANILLA ROAD, CIRITH UNGOL and other obscure and timeless classic hard rock and metal.

This is what CONVENT GUILT from Sydney, Australia amply delivers: it sounds like a mix of the glorious and gritty ‘70s hard rock, the darker side of the NWOBHM and early ‘80s heavy metal from both sides of the Atlantic. Formed in 2010, the Guilt released their initial 4 track demo in mid-2012 and recently recorded their debut LP ‘Guns for hire’. Featuring veterans of the Aussie metal scene, CONVENT GUILT is a relatively new name – but it’s destined to conquer the heart and soul of any fan devoted to the early 80s metal sound.

Raw, dirty and yet terribly catchy guitar riffs (some even hinting at early AC/DC!) will carry you back to the golden age of metal: song titles such as “Angels in Black Leather”, “Desert Brat” or “Perverse Altar” tell more of what you will get in this album than any words could… CONVENT GUILT‘s filthy vocals and its massive rhythmic section finally produce an overdose of muddy rock and roll that will find its best expression during  savage live shows. This is an album that smells of dust, sweat and energy – basically what metal is made of! 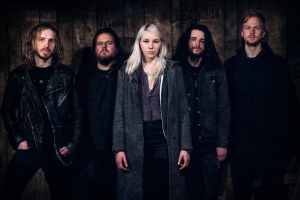 The originators of the term “Progressive Power Metal”, Steel Prophet (US), have written and performed more than 100 diverse songs in their career.  With numerous chord and melody variations spanning multiple metal/rock genres, and lyrics delving from political, social, and spiritual, there is very little the metal masters haven’t explored since the nucleus of Vince Dennis (b), Rick Mythiasin (v) and Steve Kachinsky (g) came together in 1989.

Poor timing is one of their main traits; having released a Progressive Metal masterpiece as their debut album, at the height of the grunge scene in 1995 (The Goddess Principle). The album came hot on the heels of the most beloved demo tape in German underground history; “Inner Ascendance”.

After three releases on the obscure German label Brainstorm Records, the band was picked up by Nuclear Blast Records in 1998 and released five high quality records including the well-loved fan favorites “Dark Hallucinations” and “Messiah”.

The onetime heirs apparent to Judas Priest and Iron Maiden have had a difficult road since the reformation of their ancestor’s bands.  Having soldiered on, and withstanding numerous personnel upheavals (Including a brief detour with Nadir D’Priest {ex-London} taking over on vocals for Rick Mythiasin on the “Beware” album[Massacre Records]), they stand poised on the brink of metal super-stardom with the imminent release of their magnum opus, 2014’s “Omniscient” album.  It is a complicated concept album revealing in spectacular fashion, sci fi elements, adventure, imagination, and philosophy.  It also marks the resurrection of the ‘Guitar Army’ concept pioneered by legends like Queen and Led Zeppelin.

The next chapter for Steel Prophet is the anointing of this legend into the great pantheon of metal revolutionaries.

SACRED STEEL will be soon back on the road in Europe to continue support their Cruz del Sur Release “The Bloodshed Summoning”. So far, the band has announced the following tourdates in Germany, Austria and Spain.

1. Sorrow’s Boundless Realm
2. Songs of Gods and Men
3. The Serpent and the Shadow
4. Beyond the Grey Veil
5. Trapped in the Hourglass
6. The Scavenger
7. A Thousand Screaming Suols
8. Blood, Sand And Stone